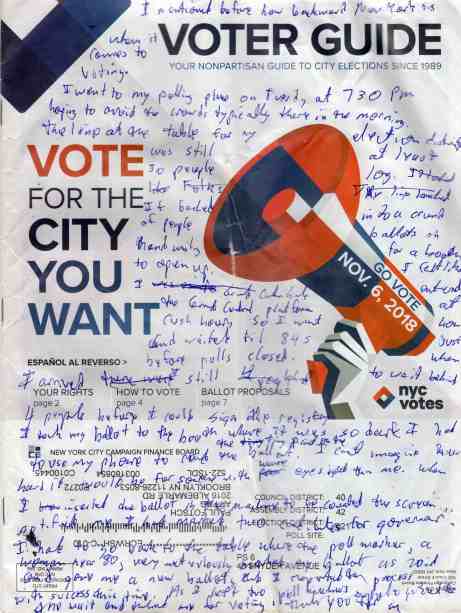 I mentioned before how backward New York state voting laws are.  I went to Brooklyn PS 6 on Tuesday at 7:30 PM hoping to avoid the crowds typically there in the morning.  The line at the table for my election district was still at least 30 people long.  It backed into a mass of people, ballots in hand, waiting for a booth to open up.  I felt like I had entered the Lexington Line Grand Central platform at rush hour.

So, I went back home and returned at 8:45, just before polls closed.  I still had to wait behind 4 people before signing my name in the registry.  After signing, I took my ballot to the booth where it was so dark I had to use my phone light to read the tiny writing on the ballot.  I cant imagine how difficult it would be for someone with eyesight worse than mine.

After I inserted my ballot into the machine, a message appeared on the screen notified me that two candidates had been selected for governor.  I returned to the registry table, where the poll worker, a woman near 80, meticulously marked my ballot as void before giving me a new one.  I repeated the process, this time with success.  As I left the gymnasium two poll workers apologized for the wait and thanked me for voting.  “Thank you for all your work today,” I replied. “Bless you all!”