Can one imagine a better Minnesota cliché than peewee hockey? How about a Scandinavian Christmas exhibit? I saw both on my recent visit home.  On Jan 8, I went to the American Swedish Institute for Handmade Holidays, featuring handcrafted rooms for each Nordic country.  In the Finnish room I found these fantastic grass shoes by fiber artist Anita Jain.

That evening, I visited the four rink Braemar Arena, home to Edina High hockey dynasty.  Tween Gretzkys (or maybe Nyrops more apt) scrambled for loose pucks and checked hard against the boards but not in the back, where red patches read “stop” after a high school player was paralyzed in 2011.

Jan 9, I caught the Somali+Minnesota exhibit at the Minnesota Historical Society developed in conjunction with The Somali Museum of Minnesota and on Jan 10 grabbed great deals at Bloomington Goodwill and Richfield Value Village.

Dad had the idea to check out a pawn shop, so we entered Metro Pawn and Gun where military assault rifles hung behind glass cabinets.  I must admit feeling anxious as stetson wearing owner, Glock in holster, examined customer gun.  Entrance door announced (hopefully?) “WARNING!! DO NOT ENTER WITH UN-CASED OR LOADED FIREARMS!” while inside a sign read “PLEASE KEEP HANDS OUT OF POCKETS WHILE IN THIS STORE.”   In 2009, a nearby shop saw a customer killed. 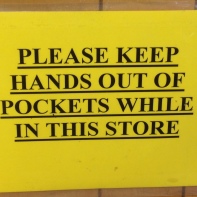 Located on the second floor of bland mini-mall repurposed to offices, The Guitar Shop in Rosemount hosts occasional Friday concerts, and Jan 11 featured the sweet vocal nostalgia of Sunny and Company.

On Saturday evening, The Mall of America–Twin Cities urban life simulation–was packed, but M of A Sears was one of over 200 stores closing after the company declared bankruptcy last year.  With this closure, Sears will be gone from Minnesota.

Sunday, I watched my niece play in a basketball tournament at the Apple Valley Community Center, Monday, Jan 14, more thrift shopping, this time at Savers also in the South Metro wasteland.   I bought a hoodie and T, both in great condition, along with a 6 pack of new athletic socks: the total after various discounts: $2.71.

Jan 17 had dinner at brother’s in St. Paul for second time, before both meals shopped at T Cities great co-ops: Seward and Mississippi Market.  At Seward I purchased a deliciously funky rind washed square: Good Thunder from Alemar Cheese of Mankato. 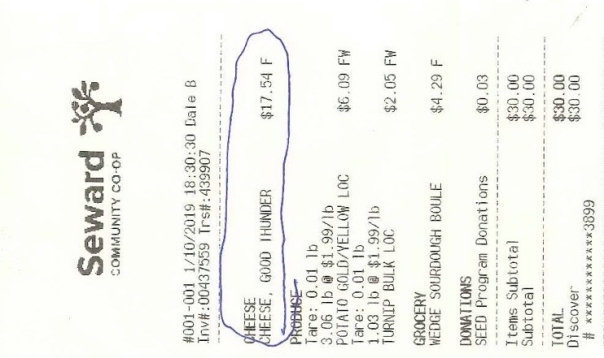 Departing on Friday from MSP, the Republic was hoppin’ with live music from Chaunté Shayne.  She’s a country singer with a great gutsy voice–also gutsy for busking at MSP airport.

My plane delayed several hours, I climbed up to the observation deck as the first snow of my visit finally arrived.